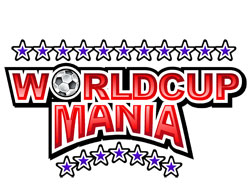 The World Cup Mania slot by Microgaming was released towards the end of May 2006, just when the 2006 World Cup was about to start. However, more than football related symbols, it has food symbols, albeit food that might be munched during a football match – chips, burgers, pizzas, pints of beer and pies. To be sure, there are some football related symbols like football boots, a referee’s whistle and a match ticket but they are really few. The background sounds are more appropriate with sounds of fans cheering their teams.

If you line up 3, 4 or 5 Referee Whistle symbols anywhere on the reels, you get 10 re-triggerable free spins bonus, tripling all the wins during free spins.

If you line up 3, 4 or 5 Kicking World Cup Mania symbols on an enabled payline, you get the bonus Free Kick game. In it you take shots at the goal and earn bonus points for every goal. You are guaranteed a lot of bonus points here as the goalkeeper doesn’t actually move!

So, is World Cup Mania gripping you too? Check it out.