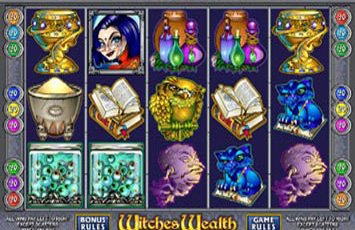 Witches Wealth slot by Microgaming is based on a wealthy witch theme with symbols of spell-making ingredients like a jar full of toads’ eyes, a chalice of salamander juice, mandrake root, and others like spell books, potions, gold dust, hooting owl and wild witch. The background sounds echo with late night atmosphere, complete with sounds of night insects.

Witches Wealth is a 5 reel 9 payline slot game which can be played in coin denominations of $0.01 to $0.25, with a maximum wager of 20 coins per payline. The highest payout in this game is 6,000 coins and the second highest 2,000 coins. The game has the added excitement of a wild symbol, a scatter symbol as well as two bonus games.

Three or four Mr. Twinkle symbols in an enabled payline trigger the first bonus game Spinning Wand. In it, you spin the magic wand either to win a bonus amount or to trigger the second bonus game, The Flying Rescue. In the bonus game, the witch tries to rescue her cat in the face of randomly falling objects from the sky. As the witch reaches milestones in her journey, you win double the initial win which can be tripled if she reaches home in one piece.

Sounds exciting? Come and join her for some real fun with generous rewards.