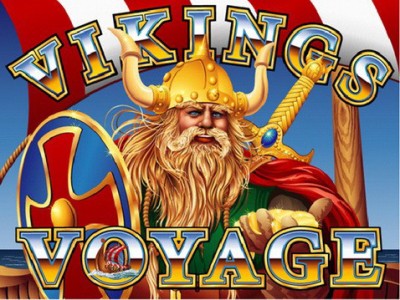 Another great game released by the famous creators of slots games on the internet, RTG, is the newly released – Viking Voyage Slots game.

With its 5 reels and 20 paylines this bonus, progressive, video (or so called feature) slots game is a pure classic for the releases made by RTG.

It also has a jackpot, which is not progressive, but rather than of the very good amount of 5000 coins. Also the second jackpot is of 2000 coins, which is nothing to complain about. Moreover there are 29 winning combinations in the game, which gives you pretty good chances of winning.

The coin sizes are varying from $0.01 to $5.00 and with the highest number of coins you can bet being 20 (1 per line), I would say that you have a pretty good variation of choices.

The theme of the game is history, or to be exact – the history of medieval Scandinavian warriors. The wild symbol in the game is a Viking and the scatter symbol is a longboat.

There is also an autoplay mode in the game, and a bonus game on the reels, which could provide you with a re-spin and up to 10 free spins.