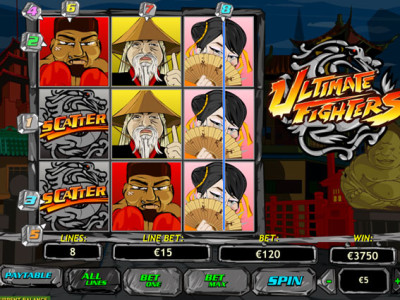 Ultimate Fighter Slots is a slots game based o the theme of the ultimate champion in the arena. The game borrows heavily from the games Mortal Kombat and Street Fighter 2. It has 3 reels and 8 pay lines that offer a jackpot of a 5,000 times line multiplier.

The sounds of the game are sure to pump up the mood and create an aura of a street match and the design has been done in detail to give the best possible result.

The main symbols in Ultimate Fighters Slots are that of various fighting characters like Pai, Korea Kid, and Ninja Garden.

The Dragon symbol acts as a scatter symbol which gives instant wins depending on the number of the symbols that show up.

The Golden Buddha works as a bonus symbol. Three of these symbols start the bonus feature of the Rock, Paper and Scissors game. There are three rounds in the game where you have to defeat the opponent and all winnings are multiplied eight times!

Ultimate Fighters Slots is bound to get your adrenaline flowing fast as you defeat your opponents and earn big rewards at the same time!

EURO GRAND
Get up to €1000 Welcome Bonus Play Now