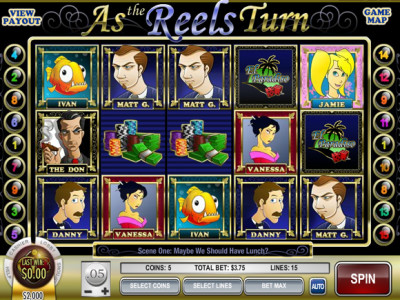 With its latest installment of the popular As the Reels Turn series of interactive iSlots games, As the Reels Turn 3, Rival proves it can improve upon a good thing without compromising the familiar, compelling layout of its previous offerings.

Once again, the player’s good (or bad) luck drives the story line and determines bonuses; for instance, spin three or more Ivan the Fish icons and you’ll win ten free spins, or find three or more Advance to Next icons to reveal the next scene.

Players will recognize some of their favorite characters from the first games such as Matt G, Danny, Vanessa, and The Don, but the new story line includes brand new characters as well. As usual, the more pay lines you activate, the better your chances of spinning a crazy multiplier, so we recommend using all fifteen!