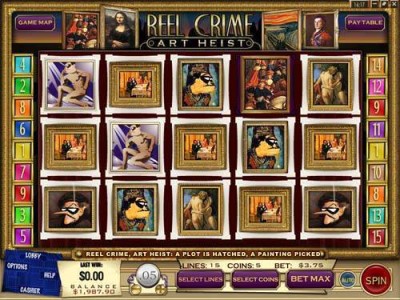 There is no need to play the first game to enjoy the second. The sequel features five reels and fifteen pay-lines, and provides even better rewards than the first Reel Crime.

Like the first game, Reel Crime 2 has stages to complete as the game play progresses: The Plan, The Tools, The Getaway, The Painting and Beach of Bastille. To advance from one stage to another, the player needs to have four or more Masterpiece icons.

There are three scatter symbols: the Art Heist symbol, and the Remy and Raoul icons.

The Remy and Raoul icons give cash rewards, but the Art Heist symbol and the Robin Hood Bonus open additional rounds where players can get extra rewards.

Unlike many other games, the player can save the game mid-play and resume it at a later stage from the point at which it was saved.

iSlot games such as Reel Crime 2 have become extremely popular, due in part to amazing graphics, slick soundtrack, and compelling game experience.