There are several types and varieties of online slots, more or less the same as the slot machines found in a brick and mortar casino. When the standard slot machine first appeared in the 1960s they were large, bulky and limited by how many mechanical systems could be fitted inside. Eventually they became digitized, the reels were replaced with screens and the combination of betting variations became limitless.

Nowadays the same slot games found in casinos can be played from your computer by setting up an account with an online casino and downloading the software. Online casinos such as VIP Slots and SuperSlots offer extensive selections of online slots, all grouped together under the standard slot categories such as Traditional Slots, Progressive Slots, Bonus Slots and Video Slots.

Traditional slots are simple 3-reel machines, patterned after the original slot machines that first appeared in San Francisco in 1887, invented by Charles Fey. They are by far the easiest and the best choice for the novice. 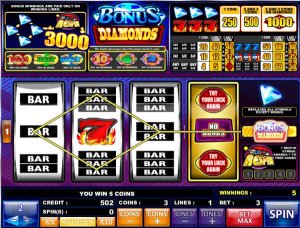 Bonus slots are the next-level-up category where variations come into play. Not only does the number of reels vary, usually 3 or 5, but so do the number of pay-lines. The average is between 9 and 20 but there may be as many as 25. As with physical slot machines a player can increase the number of pay-lines up to the maximum available on a given machine by raising the bet, offering several different possible wins in each play and increasing the chances of winning. The bonus for which the category is named for can be anything from a free spin to a free game.

Progressive slots are so named because the jackpot continues to grow, or progress, with each bet. The final jackpot on a progressive machine is a percentage of all the bets on that machine or, in some cases, a group of machines. The payout is of course larger on a group of machines, known as In-House, than on a Stand-Alone machine though the actual percentage is lower. The largest payouts, and smallest percentages, are on Wide Area Progressives, an extremely large group of slots covering many casinos often owned by several different companies. Along the way to the final jackpot players may win other prizes or awards since the jackpot is paid out only when a player hits certain designated symbols. Whichever type of Progressive it is the current jackpot is prominently displayed.

There is some discrepancy over the definition of “video slots”, especially in regards to online slot machines. Often the term is used to denote a computerized slot machine which would include all online slots and the vast majority of the ones found at any physical casino. Yet some online casinos offer a separate category called Video Slots. So what’s the difference? In most cases they simply contain more extensive graphics that diverge from the more common imitation of a mechanical slot machine. They often use themes and video graphics that bear a slight resemblance to a video game and come in a 5 or 7 “reel”. Many of them cut to a different screen view for bonus plays.

Holiday Favorites are exactly what they say, slot games with holiday themes. Halloween and Thanksgiving are two of the most popular but almost any standard holiday can be found as the theme of a slot machine. Of course their popularity picks up during the given holiday’s season.